The goal of Spades is to reach 500 points with your team.The four players are in fixed partnerships, with partners sitting opposite each other. Deal and play are clockwise.

In Spades, all four players bid a number of tricks. Each team adds together the bids of the two partners, and the total is the number of tricks that team must try to win in order to get a positive score. The bidding begins with the player to dealer’s left and continues clockwise around the table. Everyone must bid a number.

A bid of 0 tricks is known as Nil. This is a declaration that the player who bid Nil will not win any tricks during the play. There is an extra bonus for this if it succeeds and a penalty if it fails. The partnership also has the objective of winning the number of tricks bid by the Nil’s partner. It is not possible to bid no tricks without bidding a Nil. If you don’t want to go for the Nil bonus or penalty you must bid at least 1.

Spades is always the “”trump”” or the highest value. Each declared trick is worth 10 points. If you fail to fulfill the trick declared, a penalty is the entire value of that trick. Overtricks are colloquially known as bags. Each overtrick, or taking more than you bid, is worth 1 point and also earns you one “”bag””. Every set of 10 “”bags”” is a 100-point penalty. Winning a Nil bid is worth 100 points, failing a Nil bid is penalized by 100 points. 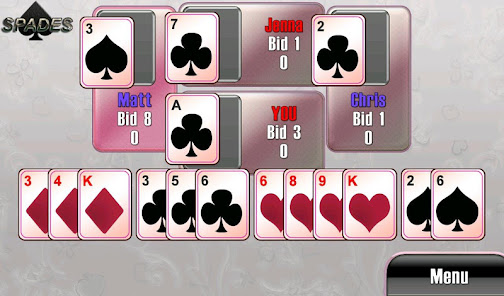 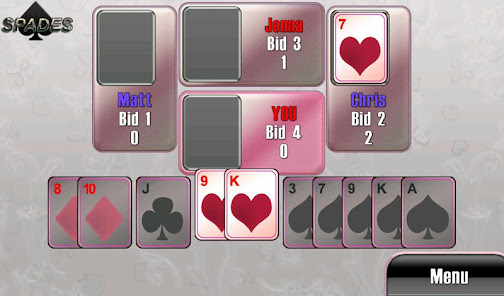 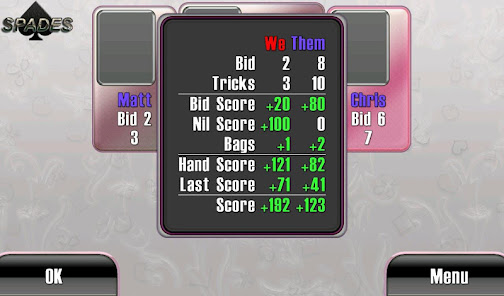